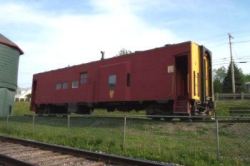 The car was supplied with Westinghouse air brakes and initially was relatively austere, with no electricity or refrigerator. The overall weight of the car is approximately 71,000 pounds. The cabin oil heater that is currently in the car was installed June 9, 1960. There is no information on earlier heating. As recently as February 1981, the caboose was still in service with the B & A Railroad.

Following inquiries and discussions with the B & A, the historical Society was fortunate to receive this (now out-of-service) caboose as a donation in the Fall of 1988. A site was prepared between the old "Green Water Tank" and the train station house. The outside was in need of sanding and painting, which was taken on by Bruce Thibeault as an Eagle Scout project. Many hours of volunteer labor also went in to refinish the outside and inside. Since that time, books, antiques, and other Frenchville memorabilia have been added for visitors to view. 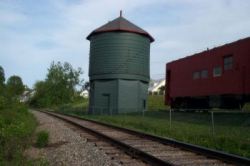 The "The Green Water Tank" as it is affectionately called, is often used as the vantage point for directing newcomers in town. Built in 1910 by the B & A Railroad and put into operation in December of that year, the water tower has a capacity of 50,000 gallongs. It is constructed of redwood, with steel reinforcing rods; the room underneath the tower was used for storage and had a coal stove for heat to insure that the water did not freeze. By 1958 the diesel locomotive had replaced the old steam "iron horse", and the tower was no longer needed by the railroad. The Town of Frenchville purchased the tank from the B & A and used it for many years as a water reservoir by the fire department.

In its early days of use, trains would stop at the tank for a "fill her up" pit stop. Carrying wood products, and even providing passenger service. The Frenchville Fire Dept. discontinued their use of the water tank in 1981. In 1985, a quasi-historical society was formed and took over caring for the tower. Volunteer crews were formed to repair the metal bands which support the top portion of the tank and fresh coat of paint was applied. In 1988 the Society was incorporated and with the aid of Boy Scouts Troop #270 - with over 300 hours of hard work - the outside of the tower was refurbished. In 1992 a cement floor was laid in the base and several donated artifacts are now stored inside.

In 1995, the "Green Water Tank" was listed in the National Register of Historic Places. 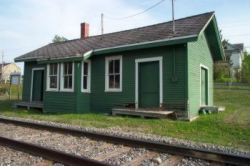 Also built in 1910, the "Station House" stands next to the water tower. The first station agent was Maxime Chasse, whose tenure lasted from December 31, 1910 to November 28, 1921. He was followed by Joseph P. Babin from December 20, 1921 to April 30, 1946, and then by Hercules Levesque from April 19, 1946 to August 31, 1970. As agents, their duties included knowing the routes, rates, and the availability of cars for freight shipment. They were responsible for shipping and receiving as wee as delivery, and had to provide conductors with switching lists, keep a record of car seals, and be responsible for all freight selling activities in town. The last agent in Frenchville was Delsie Charette, who oversaw the retirement of the station in 1971. Subsequently the B & A Railroad sold the station house to Gerard Raymond. As with the water tower, the railroad company maintains ownership of the land.